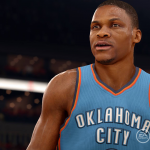 The NBA Live 16 demo is out now for both PlayStation 4 and Xbox One. If you’d like to get some hands-on impressions of this year’s game from EA Sports, now’s your chance. The NBA Live 16 demo is compatible with the newly released Companion App, and any progress you make in the demo will carry over to the full version if you pick it up.

Key features of the NBA Live 16 demo are as follows:

If you download the NBA Live 16 demo, be sure to share any impressions in the comments section below, as well as in this thread in our NBA Live 16 Forum. I’ll be posting my own impressions after I’ve had a chance to play it, and will compare it to my experiences at the NBA Live 16 Community Event back in July.

Also, for those who may have missed it, we had an opportunity to talk with NBA Live 16 Executive Producer Sean O’Brien in Episode #129 of the NLSC Podcast. Be sure to tune in for some insights into NBA Live 16 and the future of the series, as well as some reflections on the 20th Anniversary of NBA Live!

Well, there are improvements, but it’s mostly lipstick on a pig, I think. Definitely better than last year, to give EA credit. While playing the game was bearable, I wouldn’t say it was enjoyable.

Pros:
Obviously, the graphics are MUCH improved this year.
I like the new shot meter a lot, and the feedback it gives. I think I like it more than 2k’s, too.
Some of the animations, particularly after a called foul etc, are quite good (player reactions etc)
I liked the quick replay option right on the controller, saving you from having to go through the menus.
Graphics on the coaches seem better than 2ks

Cons:
The controller responsiveness (swiping for a steal and the like) are super slow.. don’t line up with when you push the button.
Any drive to the animation seemed to have an 80% chance of making the basket…and the animations seem to ignore collision
The timing of blocks seemed wonky…almost like my act of attempting to block the shot was independent of the offensive player taking the shot… the defense takes a long time to get off the ground (controller responsiveness again?)
The graphics still have that plastic/waxy look sometimes (usually in the players’ still shots before the game)
When a foul happens, you almost don’t even realize it, because you can’t really hear the ref blow the whistle.
The sounds on the game are iffy. When you dunk, it doesn’t even sound like a dunk… just a bunch of base boom.
Some of the animations are pretty good (yes, improved from last year), but still feel wonky.. especially given the physics that they added this year.

The game was okay. Not even close to have me dump 2k, though. My humble opinion.