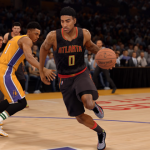 EA Sports has posted a major update on the future of the NBA Live series, via another open letter from Executive Producer Sean O’Brien over on the game’s official website. The announcement reveals that NBA Live 17 will not ship in the Fall of 2016 as usual, but instead the game will be released on PlayStation 4 and Xbox One in early 2017. A new version of NBA Live Mobile will be released later this year.

I want to share some important updates on what’s next for NBA LIVE and give you an overview of where we’re going with the franchise over the course of this year.

It’s important that you know that we are committed to NBA LIVE in the console space.  While we won’t be shipping a product this Fall, we will be back on the courts with something new and exciting for you to experience in early 2017.

Our focus this year is to deliver an amazing, high-quality basketball game to a global audience. The best way to do that is through the fastest growing, largest, and most accessible gaming platform…mobile.  As a team, we’re really excited about taking the franchise to new places with the worldwide release of our mobile game later this year.

While the move is certainly risky, and not the news that NBA Live fans were necessarily wanting to hear, hopefully the additional development time will allow the game to finally make a strong comeback, with the depth and quality that we’ve been hoping for since the reboot. We’ll certainly be discussing our thoughts on the announcement and what it means for NBA Live 17 in more detail in this week’s Episode of the NLSC Podcast.

Got any thoughts about the NBA Live 17 announcement? Feel free to share them in the comments section below, as well as in this thread in the NLSC Forum.

Am I the only person who prefer Live 16 for 2K16? It’s strange while NBA Live 16 is a great game, but a bit of improved things would be nice and worth Live 17 buying for me.
Although it, maybe, will be a free-to-play version both console and mobile (packed with Live Ultimate Team + Pro-AM, some similar to the latest MyClub edition only release of PES 2016…) :(.

Anyway, if there will be a full game release with plenty of modes and content (as always), it’s not problem for me to wait until January/February 2017. EA, just make regularly roster updates for NBA Live 16. 😉

Your not alone here, I think I’ve enjoyed Live 16 gameplay more than 2k16.

Not taking anything away from 2k as it really is a top notch game but I feel a bit like I’ve been playing the same game for the last 3 years so live 16 is a nice change up.

Iam fine with the delay but I hope EA realises that people like myself will expect a more finished product on the release date.

It definitely has to have that depth and polish, if the extra time is being spent on developing the console version. It’ll be a major letdown otherwise.

If nothing else, I prefer NBA Live’s approach to controls, though I’d like them to be deeper. I also prefer Ultimate Team to MyTEAM, though as a fan of franchise modes, I’m blown away by the depth of MyLEAGUE/MyGM. I also do quite enjoy NBA 2K16 overall.

Im sorry but I am not buying Sean’s enthusiasm one bit. This is an obvious blow to NBA Live and a damage control effort on the part of EA to pivot to mobile gaming for this year. I would have rather they took the whole year off than just a few months. I expect a stripped down version of Live 17 centered around LUT and Pro Am. I fully expect Dynasty and Rising Star to be absent from the game as well as Big Moments. Hopefully they won’t be stupid and charge full price for what ever they will offer midway through the NBA season.

NBA Live Mobile will likely be very much like LUT again. If they’re taking the extra time on the console version, I’d expect it to be fully featured. If it is stripped down – which I don’t think will happen at this juncture – then I would definitely hope that it’s not full price.