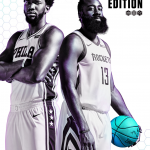 EA Sports have released an All-Star Edition of NBA Live 19. It features various bonuses including All-Star themed clothing for your One Player and new Court Battles players, as well as a new cover featuring Joel Embiid and James Harden. Harden was previously featured as the cover player for NBA Live 18.

However, this doesn’t mean that owners of The One Edition are left out in the cold. If you fire up the game before March 22nd, you’ll be able to pick up the All-Star content as well. Additionally, if you enter Ultimate Team, you’ll be gifted with five All-Star promo cards for James Harden, Stephen Curry, Joel Embiid, LeBron James, and Giannis Antetokounmpo.

A new content update has also come through for NBA Live 19. In addition to updated rosters and a couple of bug fixes, it also adds double XP for The One, Court Battles, and LIVE Events. It requires a restart of the game to take effect, but it will last through the rest of the week, in celebration of the 2019 All-Star Weekend.

As always, feel free to share any thoughts in the comments section below, as well as join in the discussion here in the NBA Live 19 section of the NLSC Forum!

Basically just to encourage more sales. More sales at a slight discount can be more profitable than far fewer sales at a higher price point, and it’ll encourage a few people to pick it up who normally might not at the regular price.

And when you work out the in-universe value of clothing items, it’s just as ridiculous. Apparently in this Neighborhood, there are t-shirts that go for tens of thousands of dollars, and no one thinks anything of it. That’s one ritzy area!

If I was in easports I will give Scottie Pippen, 10 million dollars to be exclusive in NBA Live 2020, so imagine 2k with roster player 33!in all the bulls teams. Go NBA Live!

There’d definitely be some irony there. I’d rather see MJ in NBA Live, though.