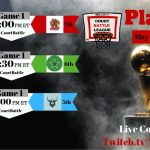 The Playoffs for the Court Battle League, an initiative by MagGamer, tip off this Sunday at 9 PM. Eight of the twenty-one squads have qualified for the postseason: the Showtime Elites, Panthers, Hardwood Mafia, Goat Gawdz, The Best Unknowns, Dukes of Jazzard, New York Titans, and International MobStars.

For the uninitiated, the Court Battle League is a 5-on-5 eSports league with squads facing off on their own custom One Courts, with the ultimate goal of being crowned King of the Court. As noted, twenty-one teams took part in the first season, with the Showtime Elites finishing with the top record of 13-3.

You can catch all the action of the Playoffs streaming live on Twitch! For more information about the league, check out this video.

Tagged with: Court Battles esports League NBA Live 19 One Court The One