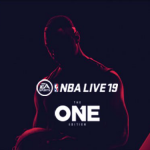 Influencers signing up for this year’s EA Play event have received and subsequently shared a teaser image for NBA Live 19. The teaser appears to hint at this year’s cover player, and possibly the design as well. Keep in mind, however, that it may also just be a generic placeholder.

The teaser obviously also confirms that NBA Live 19 will indeed be coming out later this year. While there was never any serious doubt about that, the series’ struggles and the year off between NBA Live 16 and NBA Live 18 had led to some idle speculation here and there.

Furthermore, the mention of “The One Edition” would seem to confirm that NBA Live’s career mode will retain the same branding as in NBA Live 18. It remains to be seen what enhancements it will receive, and what other improvements are in store, but it seems a safe bet that we’ll be getting some details coming out of EA Play.

You can check out the full teaser image below; thanks to DBOYGAMEZ for sharing it on Twitter. Who do you think will be on the cover of NBA Live 19? What news are you hoping to hear at EA Play? Have your say in the comments section below, and join in the discussion here in the Forum.