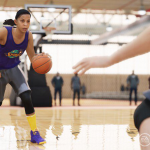 Although an official announcement has yet to be made, a few more tidbits about NBA Live 19 have been revealed. The information comes courtesy of Shacknews – who have posted an extended preview of the game complete with raw gameplay footage – and influencers including Will OS and NBA Live Girl. A few other gameplay videos, and videos discussing details that have leaked, have also been posted.

It seems that we’ll be able to create our own custom courts in The One this year, in a manner very similar to the hometown blacktop in NBA Street Homecourt, as well as the custom courts in NBA 2K’s MyTEAM and 2K Pro-Am modes. More details are no doubt forthcoming in an official announcement and preview. Speaking of courts, the video from Shacknews also provides us with as glimpse of the custom Joel Embiid court, which was listed as one of the pre-order bonuses.

The video also confirms that quarters have been added to games in The Streets, which were previously all played under the “First to 21” win condition. In addition to uncut gameplay, it also provides an overview (and naturally, spoilers) of The Rise, the story that provides the backdrop to The One in NBA Live 19. The hour long video runs from the beginning of the story at Quai 54, through the Draft Combine and concluding at the NBA Draft itself.

Also of interest, Sports Gamers Online recently had a chance to interview NBA Live 19 Creative Director, Connor Dougan. Connor was actually asked about a PC version of NBA Live, and while he confirmed it isn’t happening this year, he expressed his support for the idea, even mentioning modding. It was cool to hear, so be sure to check out the interview for his full comments!

With NBA Live 19 just six weeks away, more information should hopefully be coming through fairly steadily. We’ll certainly try to stay on top of the news, but for now, check out some of the videos below, and feel free to leave a comment with your thoughts. As always, we also invite you to join in the discussion here in the NLSC Forum.