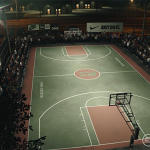 Tagged with: Allen Iverson Courts Global NBA Live 19 The One The Streets Trailer