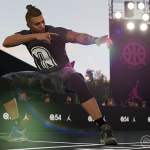 The official reveal trailer for NBA Live 19 has dropped at EA Play 2018. As you might expect, the trailer mostly focuses on the game’s career mode, The One. There are snippets of NBA gameplay footage as well however, albeit from cinematic angles. After all, it is a reveal trailer, and not raw gameplay.

Improvements to the animations, from dribbling to dunks and layups, are spotlighted in the reveal trailer. Some of the new locations for The Streets are also on display, and the voiceover makes specific mention of the word “squad”, suggesting that there might be squad options in LIVE Run and Pro-Am this year. “Trust the Process” is also mentioned specifically, and Joel Embiid is featured in a few clips, suggesting that he might be this year’s cover player. Obviously this is just speculation for the moment, with more information about the game yet to be revealed.

One thing we do know is that the game will be released on September 7th. This has NBA Live 19 slated for release the same day as the 20th Anniversary Edition of NBA 2K19, whereas NBA 2K19’s standard edition drops four days later on September 11th. Clearly, EA Sports are eager to get people playing their game as soon as possible.

What are your thoughts? Have your say in the comments section below, and join in the discussion here in the NLSC Forum. More information about NBA Live 19 should be coming out of EA Play, so stay tuned.