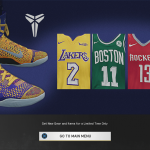 Patch 1.04 has come through for NBA Live 19. It’s a title update, so it will be downloaded via your console’s dashboard, providing you have an active Internet connection. If it doesn’t start downloading automatically, try restarting your console, or manually checking for the update. An in-game update featuring new rosters, updated contracts, and new gear in the store has also come through, and will download automatically when you fire up NBA Live 19.

The development team has provided full patch notes for the new title update. In addition to addressing issues with switching and positioning on defense, the speed of the ball on passes, player velocity, and a bug with shooting fouls, it updates some of the rules for Court Battles, adds new player faces and a ton of new commentary, and changes the ICON upgrade visuals. A few bugs and issues with online matchmaking and leaderboards are also addressed, and sweat effects have been tuned.

Please see below for the full patch notes. You can also find an update history for NBA Live 19 here in our Wiki. As always, feel free to share your thoughts in the comments section below, as well as here in our NBA Live 19 Forum.