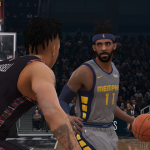 Patch 1.25 is now available for NBA Live 19! As with all previous official patches, it will come through automatically as long as your PlayStation 4 or Xbox One is online. If you encounter any issues, try checking for the update manually or restarting your console.

As previously promised, the patch includes various tuning tweaks for gameplay, and a deterrent for gamers who hog the ball in LIVE Run. Shot contests have also been adjusted, and higher-rated ballhandlers won’t be forced into picking up their dribble as often. A technical fix for users with five players is also included.

The patch also includes new likenesses for over 60 NBA and WNBA players, venue and uniform updates for Quai 54, WNBA roster and uniform updates, and some NBA rating adjustments. Data for future LIVE Events has also been pushed through in the patch.

Check out the full patch notes below, as well as in the NBA Live 19 update history over in our Wiki. Feel free to share your thoughts in the comments section, as well as here in the Forum!

Based off community feedback:

Further notes on roster updates can be found here.

Thank you, Andrew, for summing up. I’m swept away by your dictionary (“deterrent”). 🙂 Just listened today to your next to last pod when you were anticipating the patch. One thought came in my mind regarding ball hogs, that EA may force their controllers to vibrate. Live already makes it when we are about to be “granted” a backcourt violation foul (8 seconds).

Happy to be of service! In hindsight, a penalty to shooting was the obvious solution, and a great idea.