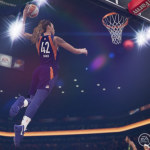 In the wake of the big announcement regarding Female Create-a-Player, an article profiling the top-rated WNBA players in NBA Live 19 has been posted over on the game’s official website. In addition to discussing the career accomplishments of their real life counterparts, it reveals the top three WNBA players at each position, which are as follows:

The article has also provided us with some screenshots featuring a few of those players in action. Check them out below, as well as here in our NBA Live 19 Screenshots gallery.

As always, I invite you to share your thoughts in the comments section below, as well as join in all of the discussion that’s taking place in the NBA Live 19 section of the NLSC Forum.