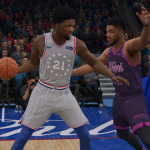 As reported by The Gaming Tailgate, EA has released their Q4 and annual report for the 2019 financial year. At the same time, they announced their upcoming titles for the 2020 financial year, beginning with the Q1 and Q2 releases in the latter half of 2019. As expected, NBA Live 20 is among the EA Sports titles.

Unfortunately for those of us who have been hoping for a return to PC – especially after Madden 19 was released on the platform – the report confirms that NBA Live 20 will be a console-only release. This isn’t unexpected, as developers have told us that the goal is to reestablish the series before expanding to other platforms.

Madden 20 and FIFA 20 are slated to be released on PC however, indicating that EA Sports is not abandoning the platform. This suggests that if NBA Live continues to improve and ultimately thrive, a PC release may one day be a possibility once more. It’s something that we’ll continue to push for.

In the meantime, feel free to share your thoughts in the comments below, as well as in the NLSC Forum. We’ll continue to cover the console releases of NBA Live as we’ve been doing since the move away from the PC platform in 2008, in addition to our coverage of NBA 2K, NBA Playgrounds, and basketball gaming in general.