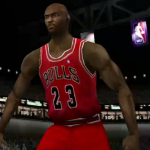 Dee4Three has put together a reel of NBA Live 2001 highlights from one of our Parsec sessions a few weeks back. In the game, we were using my 1996 season roster mod, taking on the Milwaukee Bucks with the Chicago Bulls in co-op play.

To be honest, we were expecting an easy victory, even as we cranked up the difficulty for more of a challenge. The CPU had other ideas, though! Vin Baker, Glenn Robinson, Eric Murdock, Todd Day, and an aging Terry Cummings were not intimidated by Michael Jordan, Scottie Pippen, Dennis Rodman, and Toni Kukoc, jumping out to an early lead. Even after we seized control, the Bucks weren’t about to quit, leading to a double overtime thriller. Of course, my choke job at the end of regulation didn’t help matters. Watch the highlights below, or check them out over on YouTube!

We’ll be talking about NBA Live 2001 in this week’s NLSC Podcast, as Nate and Roger – the NBA Live 2001 Legends – have returned for another guest appearance. Stay tuned for that show, and possibly a couple of further updates to that 1996 season mod! Now that I’ve been able to troubleshoot my controller issues in NBA Live 2001 PC, you’ll probably see some more highlights from the game here and there. As always, be sure to subscribe to our YouTube channel for more basketball gaming content! You may also want to check out my NBA Live 2001 retrospective – part of our 25th Anniversary of NBA Live content – and of course, feel free to discuss the early NBA Live games here in our Forum.