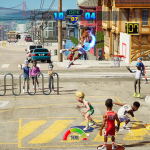 In a post over on the official PlayStation blog, Saber Interactive CEO Matthew Karcher has announced that NBA Playgrounds 2 will be released in Summer 2018. The sequel to last year’s release will feature new modes and content, as well as other enhancements based on fan feedback.

Two of the most significant additions in the upcoming game are intended to expand the experience both online and offline. First of all, NBA Playgrounds 2 will include a worldwide online league called the Playgrounds Championship, featuring several divisions supporting both solo and co-op play. The game will also have dedicated servers for better matchmaking and a smoother online experience. Four-player online co-op has also been added.

Second, offline play has been expanded with a new Season Mode. The mode will see users take their team through the regular season and Playoffs, all the way to the NBA Championship. NBA Playgrounds 2 will feature over 200 current and former NBA players, which will again be unlockable by collecting them in card packs. The blog also mentions enhancements to player models, improvements to the artificial intelligence, some expanded gameplay mechanics, and additional music tracks.

A teaser trailer has also been released, which you can check out below:

What do you think? Did you enjoy last year’s game? Are you looking forward to the sequel? Have your say in the comments section below, and feel free to join in the discussion here in the NLSC Forum.