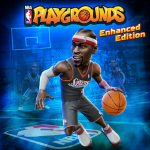 Saber Interactive has released an Enhanced Edition of NBA Playgrounds for the Nintendo Switch. Announced late last year, the new version includes all of the post-release content that the original has received, including over 100 new players, the three-point contest, additional versions of players on alternate teams, and all the various gameplay fixes and enhancements.

NBA Playgrounds Enhanced Edition is free for all users who purchased the original game on Switch. It is a standalone title, so users are advised to delete the old version after downloading the Enhanced Edition. Existing game saves will carry over to the new game however, so be sure not to delete them if you don’t want to lose your progress. Note that online functionality will remain active for the original version, but you will need to upgrade to the Enhanced Edition to play against users who have the new version of the game.

If you haven’t picked up the game yet, it’s available at half price through January 18th in the Nintendo eShop. Please note that the Enhanced Edition is not available on PC, PlayStation 4, or Xbox One, as those platforms have been receiving new content as intended since launch. The Enhanced Edition is ultimately a solution for the issues Saber has been having pushing through new content on the Nintendo Switch.

As always, feel free to share your thoughts in the comments section below. You can also join in the discussion about NBA Playgrounds here in the NLSC Forum.