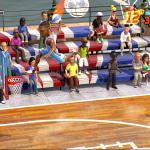 On the heels of Patch 1.4 and the Hot N’ Frosty downloadable content, Saber Interactive have pushed through another new title update for NBA Playgrounds. The new patch (v1.41) addresses an issue with the previously released Roster Unlock DLC, ensuring that it will unlock the 45 new players that were added free in the previous patch. It also optimises performance when playing on the new Miami playground, which is only available if you have the Hot N’ Frosty DLC. As previously noted, the eight Class of 2017 rookies are also exclusive to the DLC.

I can confirm that the patch has been pushed through for the PlayStation 4 and PC versions of NBA Playgrounds. If the patch is not showing up, try restarting your console or Steam client. It isn’t mentioned in the notes, but it appears as though the patch may have also corrected an issue where the new tournament content was marked as being available in the main menu despite the Hot N’ Frosty DLC not being installed.

As always, feel free to share your thoughts on the latest patch and NBA Playgrounds itself in the comments section below, as well as in this topic in the Other Basketball Games section of the NLSC Forum.