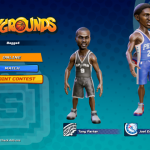 As noted in yesterday’s bulletin, the next big patch for NBA Playgrounds was expected “later this Summer”. However, it turns out that PlayStation 4 and PC users didn’t have to wait very long at all, as the new update, Patch 1.3.0, has been pushed through on both platforms. It should download automatically as long as you have an active Internet connection, but if you encounter any problems, restart your console or Steam client.

The patch adds over 30 new players to the game, including commentators E.J. Johnson and Ian Eagle, as well a few more YouTubers. Additional versions of several players have also been added on other teams that they played for. Key feature additions include an online three-point shootout, a friends invitation system, rebounding indicator, and additional online play options. Notable adjustments and fixes include the difficulty of tournaments, the amount of XP gained in tournament games, and resolutions for a couple of technical issues.

See below for the full patch notes. Feel free to share your impressions in the comments section below, as well as in the NBA Playgrounds topic in the NLSC Forum. There’s no word on when the patch will hit the Xbox One and Nintendo Switch, but hopefully it shouldn’t be too much longer.