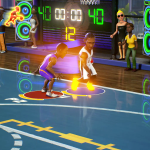 It’s been a while, but NBA Playgrounds has received a new patch, as well as some paid downloadable content. Both are currently available for the PC, PlayStation 4, and Xbox One versions of the game. If the patch does not download automatically, try restarting your Steam client or console. At this time, Saber Interactive are still working on getting all of the latest updates to Nintendo Switch users.

As well as making a few fixes, Patch 1.4 adds a total of 45 new players to the NBA Playgrounds roster, with the selection including both current and former players. Additionally, 15 more players are now playable on a second team, though as before, those cards must be collected separately. Five more YouTubers also join the Playgrounders squad, and support for voice chat has been added. Please see below for the full player listings and patch notes.

The new paid DLC, titled “Hot N’ Frosty”, is available for $9.99 USD across all platforms. It adds eight Class of 2017 rookies to packs, three new basketballs, and three new playgrounds with their own tournaments: Toronto, Miami, and Rio de Janeiro. See below for more details, as well as a trailer.

While it’s great to see NBA Playgrounds receive more content, it’s also disheartening to see that the new tournaments are being offered as paid DLC. The offline experience has been lacking in depth since launch, forcing gamers to attempt a tedious grind to unlock players once they’ve completed all the tournaments. With that in mind, Saber previously released roster unlock DLC to a mixed reaction from NBA Playgrounds gamers.

As always, feel free to share your thoughts in the comments section below. If you’re looking to join in the discussion about NBA Playgrounds in the NLSC Forum, you’ll find the official topic here under the Other Basketball Games board.