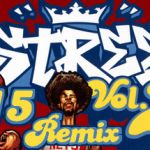 johnz1 has released a new version of the Remix mod for the Gamecube version of NBA Street Vol. 2!

The new release adds opening night 2014/2015 season rosters, with ratings based on V22 of the Ultimate Base Roster for NBA 2K14 PC.

Additionally, all team jerseys have been updated for the current season, right down to the NBA logo above the players’ names, and the gold strip indicating the number of championships the team has won.

You can pick up the NBA Street Vol. 2 – 2015 Remix mod here in our Downloads section! For more information and previews, be sure to check out this thread.