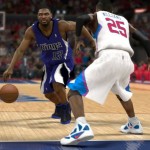 Its primarly because 2k has gotten really lazy. Its impossible for us to edit the schedule, but 2k can easily do it because they made the file. EA was able to do it because they just went in and update the schedule file, just as a few people still do for both Madden 08 and Live 08 today. Another ridiculous act from 2k, i guess its because they don’t have any competition. Can we hurry up and bring Live back so 2k can get back to how they were.

But I do like and understand what Andrew said!

I read a comment over on Operation Sports that basically said you never want to hear a developer say something is impossible, though given the circumstances it could be difficult to implement properly without causing other problems. Adding a 66 game schedule option also presents other problems with multiplayer mode, as I said. I too hope that EA can bounce back in a big way, I feel competition is good for both sides.