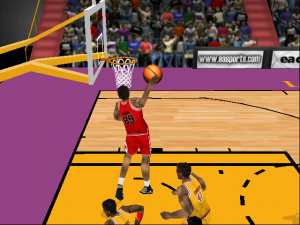 Michael Jordan as a Roster Player in NBA Live 98

Roster Players refer to generic placeholder players (usually with the name Roster Player) used in early basketball video games to represent players that could not be included due to licensing difficulties. Not including the NBA Playoffs series, Chicago Bulls legend Michael Jordan would only ever appear as a Roster Player up until NBA Live 2000, when he was included as part of the roster of Legends available in the game. Charles Barkley also appeared as a Roster Player in NBA Live 97, and other games have used the concept of placeholder players for players they were unable to license. Roster players have not been used since 1998, though generic players fill out the rosters for certain historical teams in NBA 2K. However, unlike roster players, they are not intended to represent any specific player.

In the early 90s, certain players such as Michael Jordan opted out of the NBA Player Association's shared licensing agreement, in order to negotiate their own deals for the use of their likenesses, and to sign exclusive contracts with specific video game developers.

One of the earliest games to use roster players was Tecmo Super NBA Basketball for the SEGA Genesis. The original Super Nintendo release in North America and Europe featured Michael Jordan and Reggie Lewis, however they were renamed to Bulls Guard and Celtics Forward in the Genesis version. The Australian release of the game also replaced Jordan with Bulls Guard, though Reggie Lewis remained in the game.

Charles Barkley and David Robinson were both absent from the PC version of NBA Live 95 (Robinson was included in the console releases), but both were replaced by other players on the Phoenix Suns and San Antonio Spurs respectively. Barkley was also replaced in the starting lineup for the Western All-Stars by Karl Malone, while David Robinson was represented by a player called All-Star Center, since Barkley's absence and Cedric Ceballos' presence alongside his injury replacement Dikembe Mutombo meant that there was no real player to replace him with. This marked the first usage of a roster player in the NBA Live series.

The SNES version of NBA Live 96 featured several roster players (using names such as ROSTERSG) which could be overwritten, and acted as the Create-a-Player slots. Similar players were included in the PlayStation version, though they couldn't be edited.

The name "Roster Player" was first used in the PC and PlayStation versions of NBA Live 97, in place of Michael Jordan and Charles Barkley. This naming convention would continue to be used for Jordan through NBA Live 98 and NBA Live 99. Other basketball video games featured similar names for their placeholder players, such as Roster Guard/Forward/Center in games such as NBA ShootOut, or in the case of NBA Action '98, 1 Guard.

Traditionally, roster players would have abilities similar to the player they were meant to represent, but used a generic appearance that did not resemble the actual player, generally similar (but often inaccurate) bio data, and occasionally real statistics from the previous season. In NBA Live 97, the bio data for the Roster Players representing Michael Jordan and Charles Barkley was very similar in terms of Draft information, birth date and place and jersey numbers, but the Roster Player representing Michael Jordan in NBA Live 98 and NBA Live 99 made further distinctions in the bio data to avoid potential legal issues.

The use of Roster Players came in handy in the PC versions with community made patching tools allowing users to quickly and easily edit and existing player and change them into the real players they were supposed to represent. For console users, they were more intrusive as their bio data could not be edited and the players themselves could not be deleted.

Roster Players are no longer used, due to the fact that no active players are excluded from appearing in the rosters, as all are covered by the NBA Players Association's shared licensing agreement. Various lawsuits have also discouraged developers from using roster players to stand in for historical players who cannot be licensed.