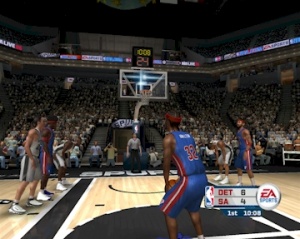 The T-Meter was a method of shooting free throws in NBA Live that was used up until NBA Live 06 and has since been succeeded by the Right Analog Method. The name is derived from its original appearance in NBA Live 95 which resembled an upper case T though its appearance has varied slightly throughout its usage. The basic premise of the T-Meter involves a ball bouncing from end-to-end within two intersecting boxes, with the aim being to stop the ball in the middle. The horizontal box represents the aim of the attempt while the vertical box represents the strength. Stopping the ball in the middle of each box therefore represents an attempt that is on target and will result in a made free throw. Players with higher free throw ratings have a larger margin for error, thus accounting for a less precise aim. The ball will also move slower for skilled free throw shooters making them easier to shoot with, while the ball will bounce rapidly for poor free throw shooters making the attempt more difficult.

From NBA Live 2004 until NBA Live 06, the T-Meter appeared on the backboard as a vertical and horizontal line (once again representating the aim and strength of the attempt) that moved back and forth, with the aim being to stop the lines as they intersected a blue box in the middle of the backboard; as long as both lines intersected this box, the free throw attempt would be on target. The box varied in size according to a player's free throw rating and represented the margin of error with a larger box appearing for better free throw shooters allowing for less precise timing. As with early versions of the T-Meter the lines also move faster or slower depending on the skill of the free throw shooter.

Although viewed as a somewhat outdated method compared to the Right Analog Method, the T-Meter is looked upon fondly by many long time players as not only a reminder of the older games but also an effective and precise means of aiming a free throw attempt. In addition to visually representing any error in the aim, the level of control over the T-Meter also allowed players greater control over intentionally missing free throws, aiding in the practice of missing an attempt in a manner that benefited teammates crashing the offensive boards.

Oddly, some users found that free throws were easier to shoot when the T-Meter was moving quickly when using a poor free throw shooter, despite the method being intended to represent greater difficulty for such players. A possible explanation for this phenomenon is that the slow moving meter actually serves to "psyche out" some users while the rapidly moving meter forces the user to react much more quickly and upon instinct.