X-Factor is an element of Freestyle Superstars that was featured in NBA Live 07. The basic concept of X-Factor is to represent players who may not be the stars of their team but are often key contributors to their team's success and can step up their game when needed. To that end, X-Factor players can utilise Star level Freestyle Superstars moves for a limited amount of time if their X-Factor status is activated during the course of a game.

The X-Factor function was only available in the PC, Playstation 2 and Xbox version of the game. The Xbox 360 version of the game utilises a similar feature - In The Zone - which only affects players with Freestyle Superstars abilities. 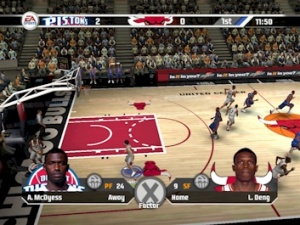 To qualify as an X-Factor, players must not possess any Freestyle Superstars abilities. Their ratings however will be close to allowing them to qualify for a particular Freestyle Superstars moveset, which will determine the Star level FSS moveset they will acquire upon activating their X-Factor status. It is therefore possible to develop some X-Factor players into Star level players over time in Dynasty Mode.

After the first basket of the game is scored, the nominated X-Factor player for both teams will be displayed. If there is more than one player on a team that can be considered an X-Factor player, the qualifying player is chosen randomly from game-to-game.

To utilise a player's X-Factor status, they must remain in the rhythm of the offense throughout the game. This basically means giving the player touches and allowing them to score points. Continuously scoring with an X-Factor player will unlock his abilities earlier, however it neither necessary or advisable to use this tactic. Once a player's X-Factor status is unlocked, the user must hold the Freestyle Superstars trigger and press the button for Off-Ball control (on the consoles and dual analog PC gamepads, this is the right analog button). A Star level Freestyle Superstars icon will then appear underneath the player, allowing them to perform Star level moves for their respective Freestyle Superstar type.

Depending on their strategy, some players very rarely utilise the X-Factor feature while some may never use it at all. Because X-Factor players are meant to represent a variable factor - the "X-Factor" to their team's success - it is generally not advisable to base a gameplan upon unlocking X-Factor status or relying heavily upon them once they are activated rather than strategy revolving around the team's best players. X-Factor players do not obtain the ability to have as great an impact as Superstar players, however through obtaining Star level status for a short period of time they can have a greater impact than usual, providing another offensive threat on the court. It is therefore an aspect of the game that can sometimes serve to enhance a player's attack at key moments of the game rather than a foundation for an offensive strategy.