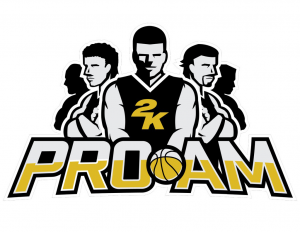 2K Pro-Am is a game mode in the NBA 2K series, introduced in NBA 2K16. In the mode, gamers can squad up and take part in pick-up games with full NBA rules, using their MyPLAYERs. This is in contrast to LIVE Pro-Am in NBA Live or NBA 2K's MyPARK, which adopt a streetball atmosphere.

Debuting in NBA 2K16, 2K Pro-Am is an online multiplayer mode in which up to ten players on ten different consoles can team up and play games. Users can compete as part of an organised squad, or play casual games with random opponents and teammates in "Walk-On" games. Games are played under full NBA rules, with five minute quarters. This is in contrast to the streetball-oriented MyPARK.

When playing as an organised squad, users are able to brand their team with their own court, logo, and jersey designs. The mode also features sets of customisable team art assets, which gamers can utilise if they do not wish to create and upload their own artwork.

NBA 2K17 introduced new features, including full squad management, a "Ready" option, a team arena where players can shoot around while waiting for a game, and more detailed stat tracking. It also features Amateur, Pro, and Elite tiers for teams, with teams levelling up by winning games. Somewhat controversially, teams must now level up before they can access the in-depth customisation options. Upon reaching the Elite level, it is also possible to drop back to Pro, if enough games are lost.

Beginning with NBA 2K16, 2K Pro-Am has been the setting for NBA 2K's eSports tournaments.

Road To The Finals Tournament[edit]

NBA 2K16 featured the Road To the Finals tournament. Teams competed for the opportunity to win a cash prize of $250,000, and a trip to the 2016 NBA Finals. The winners of the NBA 2K16 tournament were the HLZ Drewkerbockers.

The 2K All-Star Tournament was NBA 2K17's eSports event, with a grand prize of $250,000, and a trip to the 2017 All-Star Weekend in New Orleans. Still Trill were the overall winners of the tournament.