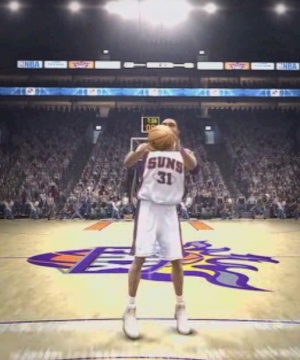 Signature jumpshots (also called signature jumpshot styles and often shortened to signature shots) refers to the inclusion of realistic and unique shooting animations for different players in NBA Live. The Xbox 360 version of NBA Live 07 introduced signature jumpshots for the most prominent NBA players as a means of making the virtual players resemble their real life counterparts more closely.

While not every player in the league used their own unique shooting form, stars and other noteworthy players with unique shooting styles possessed their own signature jumpshot animations. However, issues with the release points in NBA Live 07 often obscured the signature jumpshots as badly timed releases would result in players using a generic early/late release animation instead. NBA Live 08 sought to rectify this problem with re-worked release points and players retaining their appropriate shooting form despite the timing of the release, as well as adding new signature jumpshot forms. This led to the unpopular removal of the timed release on jumpshots, which was later restored in NBA Live 09. As of NBA Live 10, signature shots remain a part of the continued effort to add authenticity to NBA Live.

Signature Free Throw styles were featured more prominently in the PC and PS2 versions of NBA Live 07 in lieu of signature jumpshot styles. While the shooting forms on free throws remained the same, players would perform their own free throw rituals such Jason Kidd blowing a kiss to the hoop and Richard Hamilton cradling the ball at his waist before dribbling on his right three times.

While the signature free throw rituals were generally well received, many fans were disappointed by the absence of signature jumpshots in the PC and PS2 versions of NBA Live 07. Ambiguity in the official features list published on the NBA Live 07 website in addition to conflicting reports leading up to the release of the game suggested that a few signature shots might have been included in the PC and PS2 versions, however upon the game's release this was revealed to be false. Signature jumpshots were also added to the PC and PS2 platforms in NBA Live 08.

NBA Live 10's new shooting controls will also include a variety of step-back and pull-up jumpshots as well as various layups that include a spin move, jump stop or Euro-step. Certain players will have signature versions of these moves that can be executed with the appropriate controls under the right circumstances. NBA Live 10 also introduces Signature Dribbling Styles, intended to further increase player authenticity in their movements and the way they handle the ball.