From NLSC Wiki
(Redirected from My Player)
Jump to: navigation, search 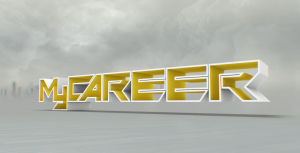 MyCAREER (originally branded My Player) is a single player career mode introduced in NBA 2K10. Whereas users control entire teams in Association Mode, MyCAREER allows the user to create a player and then guide them through their career. Originally the mode allowed players to start out as a drafted or undrafted rookie in the summer leagues and work their way onto an NBA roster through training camp or the D-League, however beginning with NBA 2K12 all players are drafted and begin their careers on an NBA roster, with the ultimate goal of being inducted into the Basketball Hall of Fame.

The NBA 2K10 version of the mode also allowed created players to be imported from the NBA 2K10 Draft Combine.

NBA 2K11's mode features the Draft Combine out of the box, in contrast to NBA 2K10 which saw the release of the NBA 2K10 Draft Combine as a downloadable standalone game available through the Xbox Live Marketplace and Playstation Network Store. It also saw the addition of post game interviews, endorsement deals and a revamped grading system amongst other "under the hood" improvements.

Beginning with NBA 2K12, the mode begins at a Rookie Showcase game where players try to improve their Draft stock. All players will be drafted somewhere in the first round and immediately make the team's roster, where they must earn minutes and achieve milestones with the ultimate goal being an induction into the Hall of Fame.

In NBA 2K13, the mode was re-branded MyCAREER, with the user's player carrying the similar branding of MyPLAYER. The mode received a few upgrades in the form of a virtual Twitter interface where fictional fans and fictional versions of real NBA players, NBA legends, celebrities and sportswriters comment on a player's performance. NBA 2K13 also sees the introduction of MyCLOSET, which allows users to outfit their players with different clothes; this feature is not available on the PC version, however.

The PlayStation 4 and Xbox One versions of NBA 2K14 introduced a new, story-driven approach to MyCAREER. This included cutscenes with voice acting for the player character, interaction with teammates, and scenarios where the user's choices would affect team chemistry. The mode also included a rival, Jackson Ellis, to whom you are introduced before the Draft.

In NBA 2K15, a new story was used, in which the user's MyPLAYER goes undrafted, and tries to latch on with an NBA team late in the season.

2K Sports brought in Spike Lee to write and direct the story in NBA 2K16's MyCAREER mode, which he titled "Livin' Da Dream". In the story, Frequency Vibrations is a highly sought after high school prospect, who eventually makes their way to the NBA with the support of their family and close friend, Vic. The mode was expanded to include three high school games, and four college games, with the player being able to select one of nine real colleges to attend.

NBA 2K17's story focuses on the dynamic duo of the user's MyPLAYER (nicknamed "The President of Basketball", or "Pres" for short), and fellow rookie Justice Young, played by actor Michael B. Jordan. The story begins in college, with PlayStation 4 and Xbox One users having the opportunity to play through the introductory stages of the story early via The Prelude DLC. Cutscenes still progress the story in between gameplay, but users have greater control over the proceedings, as well as a choice of responses during some cutscenes. Players must also manage their schedule of off-day events, including team training sessions, public appearances, and connections with other players.

The new approach to MyCAREER has received mixed reactions. While the presentation values have generally been praised, the linear nature of the stories has been criticised, in particular Spike Lee's story in NBA 2K16. Gamers also expressed a distaste for the character given to the MyPLAYER in NBA 2K15's MyCAREER, because of his brash and arrogant nature. Reactions to NBA 2K17's MyCAREER have been more favourable due to greater emphasis on the on-court aspect of the mode and less intrusive story, but some gamers have expressed a desire for a more straightforward single player career mode.