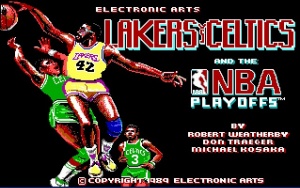 NBA Playoffs is a series of basketball video games by EA Sports and serves as a forerunner to the NBA Live series. The first three games take their names from the two teams that made the previous year's NBA Finals, and features eight of the Playoff teams from that year (as well as the East and West All-Stars), complete with real NBA players. A spinoff game, Team USA Basketball, represents the 1992 Olympics in Barcelona. The final game, NBA Showdown, includes all 27 NBA teams and a regular season mode. All games in the series feature five-on-five, simulation-style gameplay.