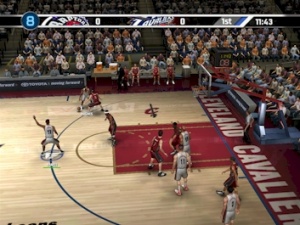 Off-Ball Control is triggered by pressing the right analog button (also known as the R3 button on the PlayStation 2) on a dual analog gamepad while the user's team is on offense. Icons will then appear above the other four players, similar to the Direct Pass function. By pressing the corresponding button the user will switch to the desired player and the CPU will assume control of the ballhandler. While moving without the ball, the user can press different directions on the right analog stick to perform different fakes in an attempt to elude defenders. Pressing the regular action buttons - shoot, pass, alley-oop and so on - will force the CPU to perform the corresponding action.

Off-Ball Control is mainly used to establish better position on offense and take advantage of situations that CPU teammates do not always recognise, such as quick cuts to the basket.

It has been possible to control a player without the ball since NBA Live 95, however it was not until Off-Ball Control was implemented that users could easily switch to players without the ball. Users could however continue to hold the pass button down until the ball reached a teammate, thus retaining control of the passer while the CPU assumed control of the player with the ball. In recent games this method is used to run give-and-go plays.