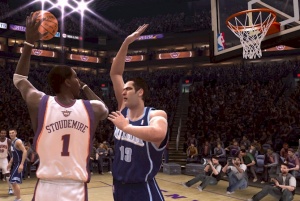 Own The Paint is the name given to the revamped post game in NBA Live 08 which reportedly adds up to 100 new post up moves to the game. Moves are performed by pressing or tapping the shoot button or dunk/layup button with the right analog stick being used to perform fakes while the left analog stick controls player movement. The post game works on a "jostle" system with the defender trying to anticipate the offensive player's moves and the player with the ball trying to outwit the defender. In addition to button presses, different moves are performed depending on a player's position on the court, the position of the defender and the offensive player's abilities.

One of the most basic Own The Paint moves is the up-and-under fake which is performed by tapping the shoot button when the offensive player is in the triple threat position with his back to the basket. This will cause the offensive player to pivot and fake a shot in an attempt to throw the defender off balance, after which he can attempt a shot, dunk or layup.

Own the Paint was not an advertised feature in NBA Live 09 but the game retains the post moves and the jostle system along with a few new moves, including the ability to "hook" a defender when trying to spin past them.