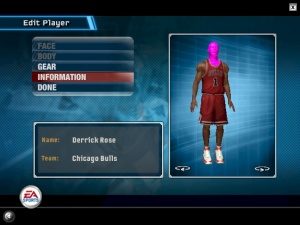 Errors with missing textures (sometimes referred to as "pink heads" or "pink faces" because of their appearance in certain games) is an error in the NBA Live series which occurs when the game tries to load a texture file such as a cyberface which it cannot find. Rather than crashing, the game simply displays a default texture which varies in appearance from game to game, sometimes taking on the appearance of a basketball, a black/grey mesh or a solid pink colour (from which the terms "pink heads"/"pink faces" is derived). When adding custom faces to the game, it may also indicate an incorrectly named file or PLAYERPKG value.

In theory, solving the problem of missing textures is relatively easy as it simply requires you to track down the missing art files and make sure that the game can load them. In practice this can be difficult especially when trying to locate missing art files required by (but not included with) roster updates, since patches do go missing over time and the original author can not always be contacted to re-upload them. Assuming you have the missing files however, it is simply a matter of placing them in the CustomArt folder so that the game can load them as necessary.