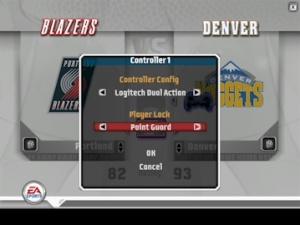 Player Lock is a gameplay function found in various NBA Live and NBA 2K games, which allows gamers to control a single player on their team, rather than being able to switch between all players in the lineup.

Off-Ball Control is an extension of the Player Lock concept, available in various NBA Live games from the PlayStation 2 era. It was also an option in Online Team Play, and the default setting if there were five users on a team. In single player career modes such as Rising Star and MyCAREER, as well as their connected online modes such as MyPARK, LIVE Pro-Am, and 2K Pro-Am, gamers are permanently locked to controlling their player. One exception to this can be found in NBA 2K17's MyCAREER, which allows gamers to assume control of Justice Young when the Orange Juice controls are activated.

Player Lock is generally used when the user wishes to take control of their favourite player (or a created version of themselves) for the course of an entire game, rather than controlling the entire team. It was once frequently used in Dynasty Stories to simulate a single player career mode, something that is no longer necessary with the introduction of fully-fledged career modes. While controlling a player without the ball, the user can force the CPU controlled player to shoot or pass the ball by pressing the corresponding action buttons.

As noted above, career modes and their connected online experiences permanently lock gamers to controlling their created avatar, a scenario that the manual Player Lock option previously sought to create.

While Player Lock has always been popular with some gamers, there was a time when many found it inadequate and frustrating as the CPU ballhandler didn't always effectively run plays or move into a position where it can make a safe pass. This was also a criticism of early single player career modes. Enhancements to teammate AI have made this less of a problem in more recent releases, and the player locked modes are now extremely popular.