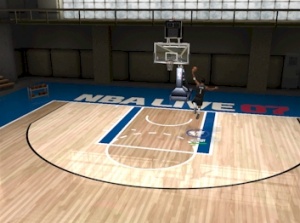 Practice Mode was first introduced in NBA Live 99 as a means of allowing users to get a feel for the game and learn new moves before taking to the court for a regular game. Users can select a single player to control in Practice Mode whom they can use to practice shooting and other offensive controls (and in later games, Freestyle moves). In NBA Live 99 and NBA Live 2000 it was possible to shoot at both ends of the court, however in subsequent games it is only possible to attempt shots at one basket.

Although Practice Mode is generally aimed at novices, veteran players will still often enter Practice Mode when a new NBA Live is released to observe changes and try out new moves or control methods. It is also used by patchmakers to obtain screenshots to preview patches such as cyberface and jersey updates. For most users, the current Practice Mode suits their needs though common criticisms include the lack of expanded options such as the ability to practice free throws (particularly with the new Right Analog Method), on-screen guides to provide feedback about jumpshot releases and Freestyle moves and the ability to practice in-depth drills with multiple players.