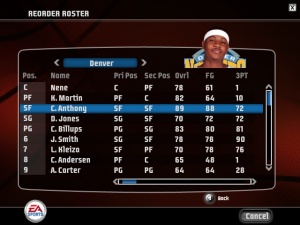 Reorder Roster screen in the PC version of NBA Live 08
The Reorder Roster menu (also referred to as Reorder Rosters) in NBA Live is a roster management function that allows users to customise the individual team lineups, either by dragging and dropping player names on top of one another or by first selecting a player then selecting a second player with whom to change places. Users may alter the starting lineup, bench order and move players to and from the inactive roster using the Reorder Roster function.

Although it has been implemented in one form or another in each game in the NBA Live series, the ability to reorder rosters has sometimes gone by different names and with differently styled menus. In the PC versions of NBA Live 95 and NBA Live 96, the function was found under the "Teams" menu. Teams were sorted by conference and represented by their logo. Clicking on a team logo would then take the user to a roster screen where they could modify the team's lineup. Subsequent games allow users to cycle through each team's roster on a single menu screen and make lineup changes eliminating the need to navigate back and forth through multiple screens.

The function has traditionally been used in all game modes as well as being accessible from the main menu, however recent games in the series have instead use the Player Rotation and Inactive List menus to modify lineups in Dynasty Mode while retaining the more traditional approach for modifying rosters outside a Dynasty game. The change has been somewhat unpopular with fans due to the ease of the Reorder Roster menu compared to the more cumbersome method of altering lineups through the Player Rotation and Inactive List screens.