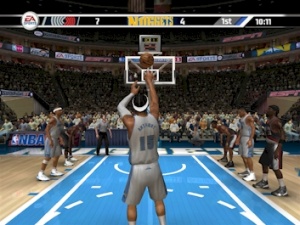 Shooting with the Right Analog stick in NBA Live 07

The Right Analog Method is a term used to describe a method of shooting free throws in NBA Live. It was first used in the Xbox 360 version of NBA Live 06 and was adopted by all versions beginning with NBA Live 07, replacing the traditional T-Meter method of shooting free throws. The Right Analog Method is intended to simulate the action of shooting a free throw by first pressing down on the right analog stick to begin the shooting rhythm and then pressing up the right analog stick to emulate the follow-through. Success depends on accurate timing of the down/up right analog motion; moving the stick up too early or too late or pushing the stick too far right or left during the follow-through motion will result in a missed free throw. Players with high free throw ratings have a wider margin for error.

Users can also elect to simulate the free throw by pressing the Shoot button. The CPU will then attempt the free throw for the user with the result depending on the user's free throw rating. This alternative is sometimes preferable in clutch situations particularly for novice users.

Although the method has been praised as being innovative in emulating the free throw shooting motion, some users have found it difficult to adapt to due to the smaller margin of error. The lack of a free throw Practice Mode also forces users to learn the system as they play rather than thoroughly practice beforehand. It should be noted however that several users have expressed an appreciation for the added learning curve and approve of the right analog method.