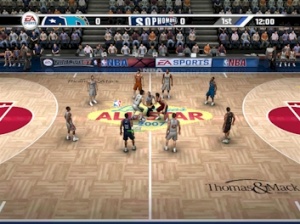 The Rookie Challenge has been featured in NBA Live since the All-Star Weekend made its debut in NBA Live 2005. Unlike the regular East and West All-Star teams which reflect the rosters from the previous year's event, the default Rookie and Sophomore teams reflect the rookies and sophomores from the current season with the seemingly most likely candidates chosen to represent each squad. Although the games usually reflect the standard of selecting nine players for each team in the Rookie Challenge, the default teams in NBA Live 07 featured rosters of twelve players similar to the regular All-Star Game.

When the game is played through All-Star Weekend mode, players are able to utilise the self alley-oop. As with the regular All-Star game, this feature is unavailable when competing in the Rookie Challenge in Dynasty Mode. Unlike the East and West All-Star teams however, the Rookie and Sophomore teams are not available in regular exhibition play.