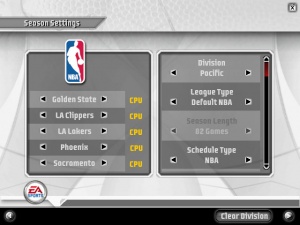 Season Mode gives NBA Live players the opportunity to play a single NBA season from opening night through to the end of the Playoffs. It remained the most popular gameplay mode up until NBA Live 2000 when Franchise Mode made its debut. With the additional management tasks and multi-year play of Franchise Mode and Dynasty Mode, Season Mode has fallen out of favour but remains in the game as an alternative for players who do not wish to play multiple seasons or handle additional front office duties. Season Mode also allows players to select multiple teams if desired.