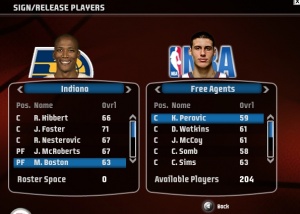 Sign and Release Players Menu
The ability to sign and release players is a roster management function in the NBA Live series since NBA Live 96. It has been implemented in various forms, sometimes as part of the trade function with players traded to or from the Free Agent Pool effectively signed or released. In Dynasty Mode, the two functions exist as seperate menus allowing the game to display additional information such as the current salary cap, cap room and contract details. When modifying the rosters outside Dynasty Mode, the Sign and Release functions are combined into a single menu that also allows the user to move Legends from the Legends Pool.

Players can be freely signed and released outside Dynasty Mode with the only restriction being the fifteen player limit. Players released into the Free Agent Pool before starting a new Dynasty game will not count against their former team's cap while players added to a roster will automatically be included in the team's payroll. As with trades, the salary cap itself is also ignored when signing players outside Dynasty Mode and players will never refuse to sign with a team. The ability to quickly and easily move players between teams using the Sign/Release menu makes it an essential function for roster patching, particularly as recent games do not allow users to trade players for an empty roster slot.

Users face further restrictions when signing and releasing players within Dynasty Mode. In addition to the fifteen player limit, the salary cap is the most obvious restriction as users must conform to the salary cap rules when offering players contracts and as in real life, players released before their contract expires still count towards a team's payroll. In NBA Live, they are represented as "Waived Salaries" on the Release Player screen. Players may also decline contract offers and if constantly lowballed in negotiations, will automatically refuse any further offers. Beginning with NBA Live 08 on the Xbox 360/Playstation 3, Dynasty Mode has featured a negotiation mini-game where a player's interest must be increased by emphasising certain attributes of the user's team (including championship potential, available playing time and cap space that can be spent on a contract) before a player will "listen" to a contract offer. This adds a further challenge/restriction to signing players.