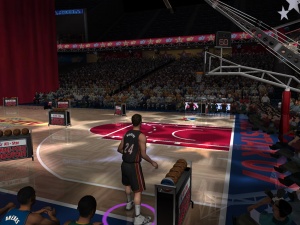 The Three Point Shootout was introduced in NBA Live 98 as a recreation of the NBA's Three Point Shootout contest involving five racks of five balls with a "money ball" as the last ball in the rack. Players have sixty seconds to make as many three point shots as they can. In NBA Live 99 and NBA Live 2000, players could choose to skip (and thus simulate) a CPU player's turn as well as take control of one of the remaining players should they find themselves eliminated. While the current incarnation of the Three Point Shootout allows players to skip CPU players, they cannot assume control of another player once they are eliminated.

The Three Point Shootout did not make a return until NBA Live 2005, when it was reintroduced as part of All-Star Weekend Mode and has been a mainstay in the series ever since. NBA Live 2005 and NBA Live 06 also featured unique shooting styles for certain players when competing in the Shootout. The contest currently reflects the rules of the real competition with 24 second overtime shootouts in the event of a tie, but features eight competitors by default in contrast to the NBA's recent trend of selecting six sharpshooters to take part in the contest. In the newer version, Ernie Johnson and Kenny Smith provide commentary during the contest. However, Kenny Smith was replaced in NBA Live 07 by Greg Anthony after Smith signed a deal to appear in the NBA 2K series.