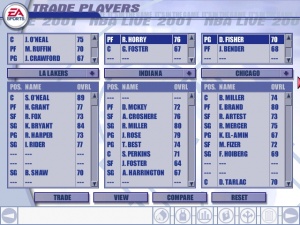 NBA Live 2001 PC's Three Team Trade Interface
The Three Team Trades function is an interface that is currently exclusive to NBA Live 2001. Whereas all other games in the series to date have only facilitated trades between two teams, NBA Live 2001 allowed users to make trades between three teams both in and out of Franchise Mode, though certain restrictions made the function difficult to use in a Franchise game. The interface allowed the user to drag and drop players from all three teams into the "trade box" above another team (except in Franchise Mode where the user could only propose movement between their selected team and both CPU teams, not between the CPU teams themselves). Trades made outside Franchise Mode were automatically approved but required the consent of both teams in Franchise Mode for a trade to be approved.

NBA Live 2001's feature list boasted the ability to trade up to fifteen players using the Three Team Trade interface (three players per team). While this could be done quite easily outside of Franchise Mode, it was more difficult to achieve during a Franchise game as the user was not allowed to include any trades between two CPU controlled teams in any trade proposals. Therefore, to trade up to the maximum of fifteen players in one deal, the user controlled team had to trade away ten players (five to each of the CPU controlled teams) while receiving a maximum of only five in return. This usually meant both CPU teams needed at least two free roster slots for the trade to work, in addition to the salaries of the included players satisfying the conditions of the salary cap (and both teams being willing to make the trade). The process was made somewhat easier if two user controlled teams were involved in the trade.

These limitations on one hand hampered the effectiveness of three team trades as the number of conditions that had to be satisfied made for a limited number of situations in which a three team trade was a viable option, but the involvement of a third team was sometimes useful in ensuring that a trade proposal satisfied the conditions of the salary cap. This was not completely unrealistic as it meant that three team trades mostly occurred in situations where they were likely to happen and could be used effectively to make a trade possible.

With no restrictions outside of Franchise Mode except for the fifteen player roster limit and a maximum of five players allowed in each team's "trade box", the ability to make trades between three teams was also a handy function in roster patching.

Because of the restrictions in Franchise Mode, three team trades were criticised by many fans who felt the process was too complicated and could not be used effectively. However, the option of multi-team trades remains a staple of the annual Wishlist.