From NLSC Wiki
(Redirected from Trades)
Jump to: navigation, search 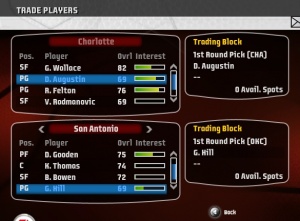 Attempting to trade players and picks in NBA Live 08
The ability to trade players is a roster management function that has existed in the NBA Live series since the beginning, offering players a means of making changes and improvements to the teams. The ability to trade players and save custom rosters is one of the key principles of roster patching; combined with the Create a Player feature it allows users to keep their game up to date. It is a key component of Dynasty Mode where users are able to create their own NBA realities and make blockbuster deals to improve their squad. While few restrictions apply when trading players outside one of the main gameplay modes, Dynasty Mode recognises several real restrictions and factors in making trades in an effort to simulate the NBA front office experience.

Up until NBA Live 97, users could only trade two players at a time, one per team. The number of "trade slots" was expanded to three in NBA Live 97 and eventually to five in NBA Live 2001, which also facilitated three team trades. NBA Live 2002 reverted back to only three trade slots; currently a maximum of six players (three per side) can be involved in a single trade between two teams in NBA Live. If a player chooses to include a draft pick in a trade proposal, it will occupy a trade slot in place of a player.

The ability to trade players is one of the main ways in which users can manage and customise their rosters before starting a Season, Dynasty or Playoffs. There are few restrictions when working with the rosters outside the main gameplay modes as salaries are not taken into account and all trades are automatically accepted no matter the abilities of the players involved. This level of customisation allows rosters to be updated to accurately reflect the current NBA or manipulated to either give the user an advantage or to drastically change the NBA landscape.

However, a couple of restrictions do apply. Teams must not exceed a maximum of fifteen players (fourteen in NBA Live 96) and from NBA Live 2002 onwards, users cannot trade for an empty roster slot. NBA Live 95 only features twelve man rosters with no available roster slots and thus has a similar restriction; furthermore, the console versions of NBA Live 95 did not allow any trades to take place outside of Season Mode. If a user wishes to trade a player for an empty slot, they must use the Sign and Release Players function.

With the evolution of multi-season play into the current form of Dynasty Mode, NBA Live has added restrictions to Dynasty trades to better emulate real NBA trades. With the inclusion of a salary cap, any trade offers must satisfy all conditions represented in the game including simply matching salaries. Trade offers must also be accepted by the CPU team, which will routinely reject offers that it deems unfair or potentially detrimental to its talent pool.

Providing the CPU with an offer that has fair trade value is simply a matter of adding up the overall ratings of the players included on both sides of the deal and ensuring that the totals are equal. The CPU will seldom accept trades that do not favour it and often prefers deals that slightly favour it, requiring the user to give up slightly more in total overall ratings than they are receiving in return. In this way, two good players can be traded for one great player and one average or less-than-average player. While the importance of overall ratings is generally overrated by a lot of users, they are certainly significant in making Dynasty Mode trades.

Other factors in successfully trading with the CPU include the team's current record, the time of the season and a player's development potential. A team with a top record is less inclined to trade one of their star players even if the offer is fair or ultimately favours the CPU in terms of total overall ratings. Teams that are struggling or closer to struggling than dominating the stands tend to be more inclined to make deals at the trade deadline.

As with trades attempted outside Dynasty Mode, players cannot trade for empty roster slots from NBA Live 2002 onwards and teams cannot end up with more than fifteen players on their roster after a transaction has been made. A trade that does not satisfy all of the conditions and restrictions will be rejected.

Beginning with NBA Live 2004, users can also trade draft picks in Dynasty Mode. Picks are usually harder to trade for though the CPU tends to be more open to trade proposals that include draft picks in more recent games in the series. As with player trades the CPU prefers equal value and will not easily relinquish picks when it is likely to miss the Playoffs and be included in the Draft Lottery.