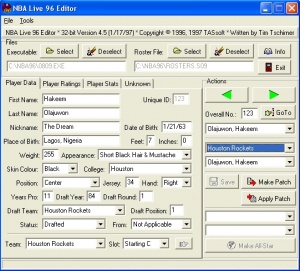 NBA Live 96 Editor
The NBA Live 96 Editor, also called WNBAED, is a Windows-based utility that allows users to edit NBA Live 96 data. Created by Tim Tschirner, the final released version is v4.5. It has similar functions to WiNBA-Ed for NBA Live 95, however it does not offer the ability to edit text strings. It can however modify data in both the NBA Live 96 executable and a saved roster.dat file, offering the ability to make trades outside the game and reorder rosters as well as edit original players and modify normally inaccessible data for created players. Users can also easily assign new players to the All-Star teams and create/apply executable patches using the editor.