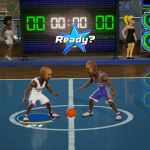 It seems that NBA Playgrounds is due to receive a significant amount of new content in the not too distant future. Saber Interactive CEO Matthew Karch posted an update in the NBA Playgrounds Community group on Facebook, stating that the upcoming content “should add a lot of new appeal to the game”. He also classified the forthcoming update as “pretty big”.

Notably, Matthew mentions “new modes and features”. While there are no further details at this time, we have already seen new tournaments added to the game, and more are supposedly planned. There was also talk of adding a three-point shootout and slam dunk contest at some point after the game’s release, so it’s possible that progress has been made on that front. The official announcement will be made within the next few days.

Whatever the upcoming new content for NBA Playgrounds may be, it will be arriving on all platforms as soon as possible. The Nintendo Switch version of NBA Playgrounds was finally patched recently, as Saber were able to sort everything out and get the patch approved by Nintendo. It remains to be seen whether there will be any major delays for future fixes and content updates on the Switch.

We’ll post details as soon as they become available. In the meantime, if you’re on Facebook, I’d recommend joining the NBA Playgrounds group for updates straight from the source, and an opportunity to provide feedback. You can also join in the discussion of the game here in the NLSC Forum.