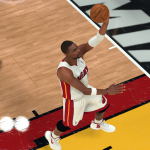 The latest official roster update for NBA 2K20 has added four new historical players to the All-Time and classic teams. As with all other roster and content updates, it will come through when you next fire up the game, as long as you have an active Internet connection. The new players are as follows:

Chris Bosh had previously been added to the game as a featured player in MyTEAM packs, along with Lamar Odom. Odom notably does not feature on any classic or All-Time teams. There are some other noteworthy historical players who are still missing, including Manu Ginobili. Hopefully, 2K can secure their likeness rights in the near future.