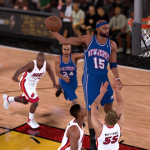 As announced by the official NBA 2K Twitter account, new Legendary teams have been added to NBA 2K20. While the name could refer to a new type of All-Time squads or other throwback content, most are assuming it means new retro teams. It’s been a few years since any new historical squads were added, so it would certainly come as welcome news.

It seems that the squads will be revealed soon, so stay tuned for further details as they’re made available. In the meantime, I invite you to check out my ongoing series of Friday Five articles in which I suggest retro teams that I’d like to see added to NBA 2K! I’m currently up to Part 11, with 55 teams. A couple of the teams that I’ve mentioned have actually made the cut in subsequent games.

What are your expectations of the new Legendary teams in NBA 2K20? Are there any squads in particular that you’d like to see added? Have your say in the comments section below, and join in the discussion here in the NLSC Forum!