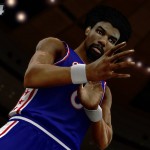 2K Sports have pushed through a new official roster update for NBA 2K14 that adds Julius Erving to the 1977 Philadelphia 76ers (but not the 1985 squad). Dr J has also been confirmed for the next gen version of NBA 2K14, which will feature the same classic teams as the current gen game.

The update will come through automatically as long as your PC, Xbox 360 or PlayStation 3 is connected to the Internet. I’ve also updated our offline pack with the latest files, for PC users who wish to update their game manually.