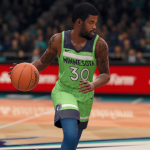 A new roster update has come through for NBA Live 18. As always, it will be downloaded when you next fire up your game, as long as your PlayStation 4 or Xbox One is connected to the Internet.

The new rosters are accurate as of October 13th, and account for the wave of cuts taking place as teams trim down their rosters following the preseason. Notably, Aaron Brooks finally appears on the Minnesota Timberwolves. Unfortunately, with the cut-off being last Friday, the latest roster doesn’t include a couple of transactions that occurred over the weekend, such as Richard Jefferson being released by the Cleveland Cavaliers.

It also seems that the Los Angeles Lakers’ retro jersey hasn’t been updated yet. There has been speculation that the Lakers will be wearing a Minneapolis throwback this season, but the classic uniform added in last week’s update is from the much more recent past. It remains to be seen what will happen there, but since new artwork can obviously be pushed through, I would assume a fix will be coming at some point if necessary.

Just a reminder that we’re collecting feedback on the NBA Live 18 rosters to send along to the development team, so if you do encounter any issues or notice information that needs to be corrected, be sure to share it in this topic in the NLSC Forum.