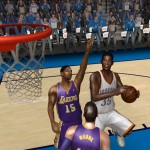 New versions (v5.1) of the current roster updates for NBA Live 2005, NBA Live 06, NBA Live 07 and NBA Live 08 are now available! The new updates feature rosters accurate as of May 13th, 2012. Download the update for the game you’re playing at the links below; please see the support threads for the “roster only” versions and supplementary add-ons.

The new rosters also contain some minor ratings updates for a couple of players, fixed dunk packages in the NBA Live 2005 and NBA Live 06 updates, some art updates that were made available after v5.0 was released back in April and a couple of other minor fixes. Please note that they do not contain new Brooklyn Nets artwork, as we’re still in the 2011/2012 season. Those updates are available separately for anyone who’d like to have the new logos early.

hi everybody!
please, is there a patch for [gear players]?

yeah thabk u very much