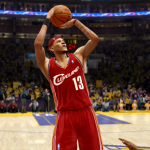 If you’re subscribed to the NLSC YouTube channel – and you absolutely should be! – then you may have seen that Dee4Three has tipped off a new video series: NLSC Greatest Performances! This series spotlights incredible performances on the virtual hardwood, and first up is Delonte West.

As you may recall, Delonte West had himself a night during our NBA Live 10 Tournament! In a series featuring LeBron James and Kobe Bryant, it was West who stepped up for Cavs4872 in the second half of Game 2 against QB1120 and the Lakers, scorching the nets for 39 points in just 12 minutes. Dee has compiled a highlight reel of Delonte’s scoring deluge, which came from a barrage of cold-blooded jumpers and fearless forays to the rim. Watch as West turns King James and the Black Mamba into mere spectators!

These epic performances by Virtual Hardwood Legends are as entertaining as putting up numbers with the all-time greats, and they stick in our minds for years to come. As this series continues, Dee will be spotlighting many incredible performances in basketball video games, new and old. From the superstars of the sport to Virtual Hardwood Legends to career mode avatars, stay tuned for a dazzling array of highlights in NLSC Greatest Performances!