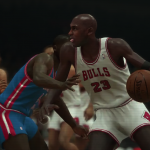 Despite my intentions to post regular bulletins for our uploads to the NLSC YouTube channel, I’ve regrettably fallen behind again in recent weeks. As such, it’s time for another round-up of the content that Dee and I have been posting!

In addition to regular features such as the NLSC Podcast and Top 10 Plays of the Week, Dee has continued to connect with the community to play a variety of games over Parsec. He and I have connected on several occasions to play NBA Live 96, NBA Live 99, NBA Live 2000, NBA Live 2005, and NCAA Basketball 10, in the process showcasing some work-in-progress and classic mods alike. Dee has also played games with Nate Stacho and JuicyShaqMeat, and shared highlights from his ongoing MyTEAM Domination campaign.

Having sorted out my recording software and settings on PC, and picked up a new Elgato HD60 for console recording, I’ve caught the video bug as well. I’ve posted highlights of the Street Legends in NBA Street Homecourt for Xbox 360, 1-on-1 games featuring Michael Jordan in NBA Live 2001 and NBA Live 2002, and a game between the 1989 Bulls and 1989 Pistons in NBA 2K14 that will take you back to the days of recording games on VHS.

Catch up on all of the recent NLSC YouTube uploads below! There’s plenty more fun on the way, so we invite you to subscribe, enable notifications, and of course, share our videos with your friends and followers if you’re digging what we’re doing on the virtual hardwood. We’re always open to suggestions for games you’d like to see us play, so feel free to hit us up.