No NBA Live 21, As Per EA’s Upcoming Games List 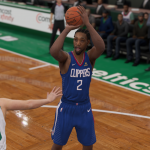 For some time now, it’s been taken as a foregone conclusion that there won’t be an NBA Live 21. In case anyone was still holding out hope, the latest financial report from EA, as well as the list of upcoming releases on their website, has made that official.

In October last year, the official NBA Live Twitter account confirmed the decision to skip NBA Live 20. At the time, the post seemed to indicate plans to return in 2020 with the launch of the next generation of consoles. Technically, NBA Live 21 was never officially announced, but whether or not it counts as another cancellation is arguably just splitting hairs. The point is that no basketball game is coming from EA Sports this year.

The silence from the official NBA Live social media accounts – aside from a tribute to the late Kobe Bryant earlier this year – had many people speculating that this would be the case. While there is no word either way on the future of the series at this point, there isn’t much to get excited about right now if you’re a PC or console gamer. NBA Live Mobile is still available, and is being updated with the NBA’s restart.

As for our part, we’ll continue to collect feedback and send it to the developers as long as the series hasn’t been canned for good. We’ll also post any news as it becomes available. In the meantime, I’ve condensed the NBA Live 21 section into the NBA Live 19 section of our Forum, and updated our Wiki accordingly. Feel free to join in the discussion here, as well as in the comments below. We’ll be discussing the situation in Episode #334 of the NLSC Podcast, coming out shortly. Our 25th Anniversary of NBA Live celebrations will also continue, so stay tuned for that content.